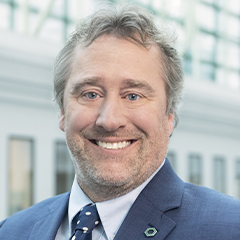 Mr. Gauthier is a graduate of the actuarial school at Université Laval and a Fellow of the Canadian Securities Institute. He has served as Manager of the Desjardins Securities Quebec City branch since 2000 and was named Vice-President and Regional Manager for Northern and Eastern Quebec in 2004.

His role in the organization is to develop, implement and support the Desjardins Securities business plan in the region.

Mr. Gauthier remains involved in financial circles as a member of the Cercle Finance de Québec and of the Association des Gens d’affaires du Vieux-Port de Québec. His social and community commitment is shown through his involvement in the United Way and his membership on its committee of major donors in the Quebec City and Chaudière-Appalaches area. He also sits on the board of directors of the Club de natation de la région de Québec (swimming club).